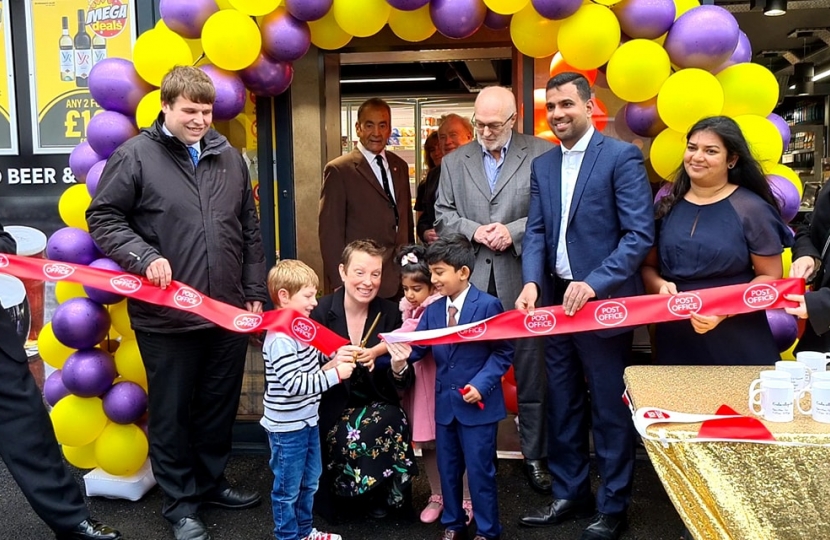 Tracey was pleased to “cut the ribbon” on Friday 29/10/21 to officially open Eccles Village Store & Post Office which has doubled in size and undergone a full refit.

Postmaster Thiruvilangam Arulnithy, known as Aaron to customers, had a major extension to his shop at 3-5 Varnes Street, Eccles, Aylesford, ME20 7HH to greatly increase the range and amount of stock in his Premier convenience store. All the fridges and freezers, shelving and counters are new. The entire store layout has changed. Post Office services will be provided alongside the retail counter.

Aaron had planned to start the big building project in March 2020, but the pandemic put everything on hold. His attention then completely focussed on ensuring that his convenience store and Post Office remained fully open to meet the needs of the village, especially as people wanted to stay local and were working from home.

Tracey Crouch, MP said: “It is so heart-warming to hear about outstanding Postmaster, Aaron, and everything that he has done for Eccles. His store looks amazing and he has made access improvements to make it easier for people with mobility difficulties. He really cares about his customers and his community. I am delighted to be performing the official opening.”

As well as greatly increasing the size of the shop he had a new shopfront installed including an automatic door to make life easier for those in wheelchairs, mobility scooters and those with walking difficulties to enter his store.

Aaron, who took over the shop eight years ago, said: “We have lots of elderly people who come in and I could see them have difficulty manoeuvring, so I was determined to make life easier for them as part of my plan to improve the shop. People are very grateful.”

Tracey is very pleased to confirm that her Over 55s Fair will return to the Victory Academy Chatham on Friday 8th April 2022.